A while back I reviewed the TRB Interstate highway report, which I gave high marks for documenting the need for rebuilding the system, but low marks for being wobbly on the issue of adding lane miles to the system at a time of climate crisis (my posting here).
The flip side of too much highway expansion is too little transit expansion.  Yonah Freemark captures the comparison in this graphic (yes I know these numbers are not in some respects equivalent).  His story is here.
Dramatically ramping up the number of transit miles built is not easy, but something we need to address in the next surface transportation (Green New Deal?) bill. 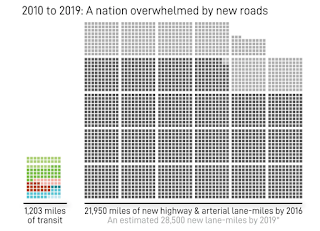 The New Jersey State Plan is Back!

Or at least the State Planning Commission is back, with a mandate to finally update the State Plan.
New Jersey’s State Development and Redevelopment Plan, an ambitious, comprehensive, state-of-the-art planning document for guiding public policy and investment in the nation’s most densely populated state, was published in 2001 (it’s still available here).  But later attempts to update it – as required by statute – languished, largely for political reasons.
Now New Jersey’s current governor, Phil Murphy, has funded the State Planning Commission and given it new members and a renewed mission.
As Donna Rendeiro, executive director of the planning office, stated at a presentation at the recent Redevelopment Forum sponsored by leading state thinktank New Jersey Future, the commission is systematically attacking the work that needs to be done, beginning with updating policies and procedures and rules.  They are in a “listening” mode, taking in views as to how the old plan should be updated.  A core issue is how to respond to the criticism that the old plan was too detailed, too prescriptive, and too burdensome, especially for small towns with little or no professional staff who needed to comply with its provisions.  A related issue is whether or not to include a detailed map – as the old plan did – showing where development was to be encouraged and where discouraged.
There are lots of details to be resolved, but I (a veteran of many New Jersey State Plan battles) am glad it’s back.  Statewide planning is an enormous challenge but can have enormous benefits!  Good luck NJ State Planning Commission! 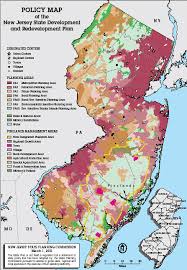 Fans of the “Complete Streets” concept will welcome New Jersey’s latest contribution: “Complete and Green Streets For All.”  (For the uninitiated, the idea of “complete streets” is that streets should be designed to be safe and welcoming for people walking, cycling, boarding buses, sitting at sidewalk cafes, and doing other human activities beyond hurtling along the pavement in automobiles.) 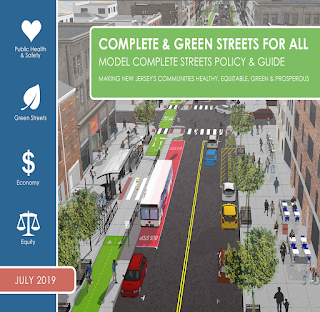 The guidebook is published by New Jersey DOT (available here) but is the product of a very successful collaboration (led by the Tri-State Transportation Coalition) of advocacy groups, government agencies, academics, and others.  As presented at the recent Redevelopment Forum sponsored by New Jersey Future, a leading state thinktank, the group sought to weave health, equity, economic development, safety, and other concerns into a model of Complete Streets development.
Perhaps most significantly – from a design standpoint – the guide explicitly advocates making green infrastructure a key element of future Complete Streets, with direct benefits for climate change resiliency.
The new publication is not a design handbook.  NJDOT has other manuals for that.  It is, as the subtitle says, a “Model Complete Streets Policy and Guide.”  It provides local officials and citizens with a model policy, a model resolution, public participation guidelines, checklists, references, and other practical information for making Complete Streets happen.
Congrats to Commissioner Diane Gutierrez- Scacetti and my old colleagues at NJDOT for pushing this effort forward and for opening their doors to this wide coalition of people who can add so much to the future of transportation.
“Complete and Green Streets For All” helps define a vision that all of us should pursue!
Posted by Mark at 8:02 AM No comments:

Boris Johnson has always been closely identified with buses: promoting a new design while mayor of London, supposedly painting model buses as a hobby, and now promising £5 Billion ($6.5 Billion) for more buses and bus infrastructure throughout the country (my note here).
So, I can add my anecdotal report from a recent stay in London, that yes those London buses work really well!  At least in central London, offpeak, I found them to be clean, convenient, easy to use with a card tap, and welcoming to tourists (including strollers).  And there were CLEAR visual and verbal announcements of the next stop.  Why can’t we manage that in this country? 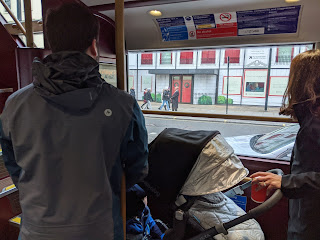 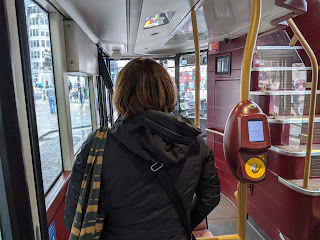 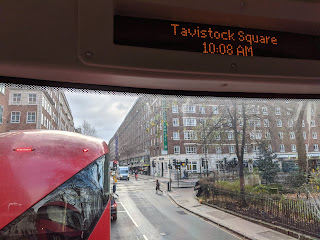 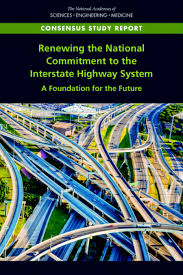 It will come as no surprise to transportation professionals that the US Interstate Highway System is in need of enormous investment to maintain a state of good repair.  A lot of the system is more than 50 years old and is simply worn out from decades of much heavier traffic than planned for.  A new report (here) from the Transportation Research Board, commissioned by Congress, documents these needs in detail and makes a number of recommendations for the future.
The central recommendation is that Congress establish a new Interstate Highway System Renewal and Modernization Program (RAMP), on top of existing programs, to fund the reconstruction of the system.  How to pay for the new program?  The authors recommend – wisely in my opinion – enacting a major bump in the federal gas tax, with indexing, along with greater freedom to toll existing highways.         Consideration of other revenue sources, such as a VMT fee or carbon pricing, would be postponed.
This report is a valuable building block for future surface transportation legislation.  I do, however, have two major concerns.
First, the authors dance around the issue of adding lane miles to the system.  After documenting the congestion on much of the system, they concede that adding mainline capacity is “an expensive and often impracticable option.”  They go further to note that: “Some opponents believe that adding more urban freeway capacity will further contribute to the outward expansion of metropolitan areas, increasing public demand for still more roads and infrastructure.  Some also contend that expanding capacity by widening existing routes or building new lanes induces additional travel, leading to increased highway VMT adding to congestion over time, as well [as] GHG emissions.”  Yeah, some do.  Despite these modest nods to the issues surrounding adding lane miles, the proposed RAMP program could be used to fund them, and the authors are sympathetic to the demands raised by newer Sunbelt metropolitan areas.
In my view, given the gravity of the climate emergency facing us, the next surface transportation bill should include a ban on the use of federal funds for mainline highway capacity increases.  We really just. Should. Not. Be. Doing. That.  Instead, let’s fund transit capacity increases in Interstate corridors.
Second, the authors recognize the importance of climate change, but are mainly concerned with its effect on the functioning of the existing system.  These concerns are well founded, and a robust approach to improving resilience is absolutely needed.  However, the mitigation side of the equation – how to use the Interstate system to reduce GHG emissions and promote sustainable travel – is given short shrift. They concede that:  “As the backbone of the U.S. transportation sector, the Interstate Highway System contributes to these emissions and can thus play an important role in reducing them. Inasmuch as the Interstate Highway System has facilitated low-density suburban development and reliance on automobiles, a transformation to a low- and no-carbon transportation system will increasingly mean that its planning is integrated with the planning of low-carbon mobility options, from public transit to zero-emission trucks.”  They also note the importance of charging stations,  “the lack of which is an impediment to more wide-spread adoption of zero- or low-emission vehicles in intercity transportation.”  But what do the authors recommend?   More study.
In my view, the next surface transportation bill should commit to “electrifying” the entire Interstate Highway System (and the whole National Highway System for that matter) by funding installation of fast (and superfast, hyperfast, etc.) chargers at frequent intervals.  This would be straightforward, effective, and not all that expensive in the big scheme of things.
Kudos to TRB for pulling off such an important study.  I hope the report (along with my concerns!) helps to provide focus to what is likely to be a chaotic legislative process for the next surface transportation bill.

Many people on this side of the pond have conflated Boris Johnson’s election victory in the UK with the horror show we are living through here.  True, Johnson has adopted some pretty unsavory election tactics and governing measures.  But his overall approach to government is very different from what we have here. For one thing, he is seriously pursuing policies to “level up” the British rust belt towns in the north of the country, many of whose “left behind” folks voted for him out of frustration and despair.  This is not just talk, but actual major investments, especially in transportation.
In recent days, Johnson has committed the country to building a controversial high-speed rail route between London and Birmingham and then further north.  This “HS2” project – which is estimated to cost well north of $100 Billion – has attracted criticism for its high cost and for slashing a scar across the bucolic English countryside.  I could certainly criticize elements of its design, but it will still make a dramatic change in surface transportation in Britain (see a good summary story here, the project website here).  The fastest train travel time between London and Birmingham will be cut from 1 hour 22 minutes down to 45 minutes.  London to Manchester will be reduced by a whole hour: from 2 hours 7 minutes to 1 hour 7 minutes.  Major capacity will be freed up for both passenger and freight traffic on the existing mainlines.  Rail travel can replace air travel for many trips inside Britain.  All of these factors will provide a major boost to the government’s efforts to address the climate crisis – and yes the Johnson government is doing that too.
Of course, a project this big will take years to build, with the first partial services scheduled to open in 2028.  At least partly for the purpose of balancing this enormous investment in one corridor with attention to other parts of the country, Johnson has also pledged a £5 Billion ($6.5 Billion) investment in buses over the next 5 years (story here), and £1 Billion ($1.3 Billion) in bicycle and pedestrian projects (story here).
Whatever political benefits the government is hoping to gain, I’m happy to see them investing in high quality, modern, green transportation as a way of seeking them! 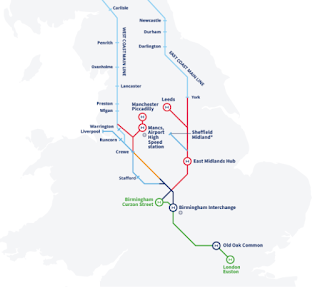 You have to be pretty jaded not to be impressed by Elon Musk’s latest electric vehicle: the Tesla Cybertruck.
It looks like some sort of stealth lunar rover, has more power and capacity than most “typical” pickup trucks, accelerates like a sports car, has all kinds of cool features like onboard power and compressed air – and will have a starting price of only $40,000!

Or a video review here.

I have to say it’s very gratifying to see Tesla once again leap ahead in an area where others seem to be stuck in a 20th century fossil fuel rut! 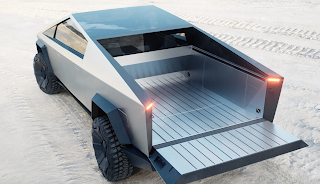