Following the President’s Georgetown speech on climate change, the Georgetown Climate Center has released the results of new polling which shows very strong public support for EPA action to curb greenhouse gas emissions.
According to the GCC poll, 87% of the public “want the EPA to move forward with action to reduce greenhouse gas emissions from power plants and large industries.”
(GCC press release here, polling memo here, my earlier thoughts on the President’s speech here.)
Perhaps even more striking is the finding that a majority of those polled (53%) would favor a federal carbon tax, provided the revenues were invested in “less polluting alternatives.”  Support drops off if revenues were to be used for other purposes, although even the least popular alternative – using the revenues to offset income taxes – gets plurality support.  (See my thoughts on carbon taxes and transportation here.)
For me, this polling reinforces my belief that the American public is ready to face the challenges  - and opportunities – of the 21st century if they are given enlightened leadership.


Kudos to Georgetown Climate Center for the timely poll!
Posted by Mark at 11:13 AM No comments:

I think all of us concerned with climate change were heartened by the President’s Georgetown speech on the subject.
The speech (and the accompanying plan documents) weren’t long on specifics and there were some areas left a bit sparse (notably transportation), but it represented a clear statement of Presidential leadership on one of the great issues of our time.
Most powerful point: Will direct EPA to adopt new rules governing carbon pollution from power plants.  Although he didn’t use the “c word” in his speech, coal is the issue.  In fact, he had some words of praise for natural gas as a transition fuel.
Second newsworthy point: Hold onto your hats on Keystone pipeline.  Looking more like a “no.”
Most memorable quote: “We don’t have time for a meeting of the Flat Earth Society.”
As to transportation, one could have wished for more.
Some specifics:
·      Continued support for alternative fuels, including a new initiative to add more alt fuel vehicles to the federal government’s own fleet.
·      Direction to federal agencies to support more “resilient” investments, including for Sandy rebuilding funds.  Does this mean a change in criteria for discretionary investments?  New design standards?


We do have a stated goal of  “building a 21st century transportation sector,” so hopefully there is room for more detail to be filled in.  How about proposing a new transportation reauthorization bill which begins to build that 21st century system, with lots of new technology, lots of transit, and real connections between land use and transportation – all funded by a major hike in the gas tax?  I understand that we don’t have a lot of hope right now in a House where the Flat Earth Society has a majority or in a Senate which is completely dysfunctional, but as the President says, we don’t have time to waste.
Posted by Mark at 4:10 PM No comments:

While CitiBike continues to be a source of controversy and excitement in New York, for reasons that aren’t entirely clear to me (see one of the latest Youtube entries here), the Hubway bike sharing system in Boston appears to have smoothly integrated itself into the city’s transportation system.
Admittedly, my experience is limited and anecdotal, but in a recent visit to Boston I encountered a number of Hubway sites, many near T stations, with people checking out and returning bikes frequently and with apparent ease.  (This map of the Hubway “station” network is pretty impressive!)  I also saw plenty of Hubway bikes rolling up and down the streets, and people I talked with found the whole system pretty easy to use.


Bike sharing clearly works in Boston and other cities and in my view adds real value to an urban transportation system.
(Photo is the Hubway station at the Cambridge Public Library.) 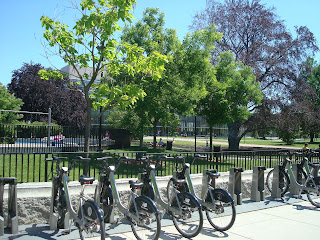 Wisconsin ruling on highways and transit planning could have big impacts

A U. S. district court in Wisconsin has (at least temporarily) held up an Interstate highway project in Milwaukee (the “Zoo Interchange” reconstruction) because Wisconsin DOT failed to consider the impacts of a building program that is widening freeways in the metro area while transit service is being curtailed (text of decision here).
On paper, the Milwaukee area has a plan for both doubling transit service and widening freeways.  In practice, the Walker administration is going gung-ho on the highway side while effectively letting existing transit service wither away – let alone building a new system.  WisDOT’s EIS referenced the regional plan and assumed a transit build.  The court wasn’t buying this, calling the transit numbers a “pipe dream” given what’s actually happening on the ground.
Given the highway and transit imbalance, the court concluded that the plaintiffs (a coalition of inner city groups concerned about limited reverse commute opportunities, etc.)  “are likely to succeed on their claim that the EIS is deficient because it does not address the potential growth-inducing cumulative effect of highway expansion on the Southeastern Wisconsin region.”  The ruling also said that the EIS was likely to be deficient for the same reason in its treatment of social and economic and air quality impacts.
The court process is still early, but the court was pretty clear on some of its conclusions and also stated clearly that WisDOT should expect the same issues to arise on related projects, including the proposed 3-mile widening of I-94 between the Zoo Interchange and downtown Milwaukee.
If this ruling holds, it could have implications for other projects in other states.
The moral of the story (in my opinion): highway widenings are only justifiable as part of an overall transportation plan that integrates roads, transit, land use, other infrastructure, and environmental assets in a sustainable fashion.  And that plan needs to be a real plan with real implementation.
We can hope that this ruling will give Wisconsin the opportunity and incentive to do some real 21st century transportation planning.


“Blueprint Planning” anyone?
Posted by Mark at 2:35 PM No comments:

Well, not highways made of bamboo (it might be strong enough in some cases, but maybe a little bumpy).  But how about bamboo on roadsides?
In an earlier posting I suggested the need for aggressive research on vegetative materials that can be used for carbon sequestration while serving other needs.  Bamboo  - although an unorthodox choice – should be investigated.  It is reported to be very effective at carbon sequestration, if properly managed.  It also requires little to no maintenance, provides effective screening of incompatible land uses, and might even work for crash cushioning.


OK, it’s not native to this country, but it’s time to push the envelope in this area.
Posted by Mark at 6:58 PM No comments: