I visited St. Louis recently and rode the Metrolink light rail and found it to be a nice ride.  Pros: connects some major activity centers (ballpark, airport, Union Station, Forest Park, Central West End, etc.), connects Missouri and Illinois, comfortable ride.  Cons: not a network (they call it two lines but it’s really one line with branches in the Missouri suburbs), some stations (notably Airport Terminal 2) are a longish walk to the actual activity center.
I was also pleased to see the Ballpark Village development (which I wrote about a few years ago) finally beginning Phase Two.  Right now, it’s mainly bars and restaurants across the street from Busch Stadium (photo below), but will soon have extensive residential, office, hotel, and additional retail space (website here).  St. Louis is definitely another success story in the downtown ballpark revitalization book!
One of the drawbacks of a transit line running mainly on old railroad right-of-way is that it traverses long stretches of semi-desolate industrial zones and rail yards.  But this also provides an opportunity for new infill development.  In St. Louis, Metrolink is building an infill station called “Cortex” after the expanding high-tech district it will serve (photo below, story here).   Another TIGER grant success story! 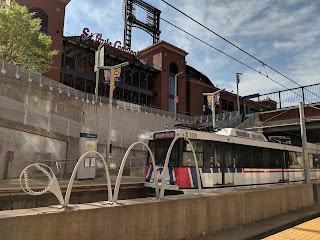 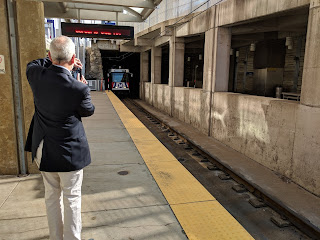 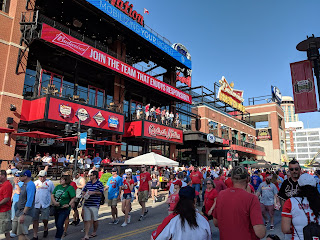 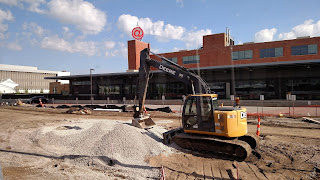 My favorite bridge and I

For literally years now I have been helping the Delaware Riverkeeper Network and local residents fight to preserve the 200-year-old, one-lane Headquarters Road Bridge in rural upper Bucks County, Pennsylvania, which PennDOT insists on demolishing and replacing with a new, longer, wider structure.  Why have we not been able to resolve this issue, which looks like a textbook case for applying context sensitive design and collaborative planning?  It’s a long story (which has not yet ended).
You can watch my presentation at a recent briefing for press and local elected officials here.  The news story from the event is here.
Photo below (courtesy of Delaware Riverkeeper Network): yours truly on the left, May van Rossum, the Delware Riverkeeper, on the right. 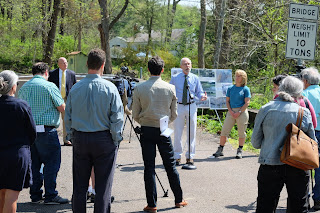 Electrify America – the initiative born of Volkswagen’s restitution for cheating on car pollution tests – is doing just that: electrifying America.
They have now opened their first “ultra-fast” electric vehicle charger at a shopping center in Chicopee, Massachusetts, just off the Mass Pike.  This new charger will be able to charge vehicles at an amazing rate of 20 miles of range per minute (story here).  Of course, most EVs aren’t yet ready for that kind of fast charging, but they are on the way too.  (For an intro to some of the technical issues involved, see my previous blog posting here.)  The Chicopee charger is the first of what will be a network of chargers on key corridors throughout the country (see map below).  This is a serious ramping up of EV infrastructure.  VW may be atoning for past sins, but we should be very grateful to them for doing a lot of the heavy lifting in electrifying America!  And quite a coup for Chicopee too (a town I know well)! 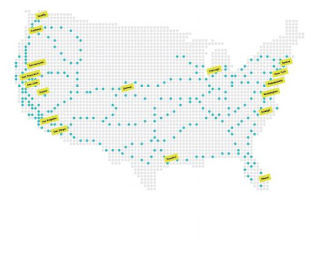 Today 14 new electric Proterra E2 Catalyst buses start rolling in the Washington DC Circulator fleet (story here).  Since the Circulators are so visible – to visitors and tourists as well as to residents – this could be a real milestone in the electrification of public transportation in this country.  We need to make this work.
Yet another cool thing happening in DC!  (See my stories on multimodal transportation at the new Wharf development here, dockless bikes and scooters here.) 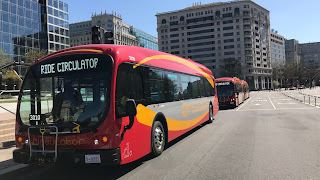