In the waning days of the Obama Administration, the U. S. Treasury published a report on big infrastructure projects we are not building in this country.  The report (40 Proposed U. S. Transportation and Water Infrastructure Projects of Major Economic Significance, available here) was a product of the Administration’s Build America Investment Initiative and was presumably intended to bolster the “needs” side of that effort.
The projects selected (there were strict criteria) range from building California High Speed Rail to rebuilding the entire I-10 corridor to completing the Second Avenue Subway in New York.  Most are site-specific, although some – such as Positive Train Control and National Traffic Signal Coordination – are nationwide in scope.  Each project is given a two-pager of facts and figures.
This report is very effective in demonstrating the sort of projects that other countries are building and we’re not.
Would I have selected the same projects?  Some, but not all.  There is too much highway widening (more urban freeways will only exacerbate long-term problems) and too much port improvement (why exactly are we subsidizing Asian manufacturing by spending huge amounts of money to accommodate Panamax ships?).
A few nationwide projects I would add:
·      Electrify the Interstate system (fast chargers for electric vehicles)
·      Double the fixed-guideway rapid transit network
·      Fund sustainable neighborhoods (infrastructure “islanding”)
·      Advance climate change resilience in the most vulnerable areas
·      Design and operate marine highways (a great idea that never advances beyond the concept stage)
The report authors note that the main reason most of these projects aren’t advancing (or are advancing too slowly) is lack of funding.  In keeping with the Obama Administration’s stance, they suggest more public-private financing and avoid talking about the obvious need for much greater tax revenue for infrastructure.


Quibbles aside, the authors (including two friends and occasional colleagues of mine, Ray Ellis and Dick Mudge) have done a real service in demonstrating the scale of investment (with real project examples) that we need to thrive in the 21st Century.
Posted by Mark at 7:12 AM No comments:

What do you want? Information! (transit edition)

I recently commented on the disparity between the remarkable breadth and depth of highway traffic information collected and managed by transportation agencies and the all-too-often paucity of information made available to the customer.  On a recent visit to DC, I experienced really good information and really bad information on the transit side of things, on the same Metro line.
As an only-occasional Metro rider, I like to have reassurance that I’m on the right train (this is the voice of experience speaking) and to keep track of when my desired station is approaching.  On one trip on the Orange Line, I was in an information black hole.  There were two system maps in the car (not near me).  There was no line map and no notice of the next stop.  The name of the station on the platform couldn’t be made out through the tinted windows if it was on the far side.  And the announcements by the operator were totally unintelligible.  (Don’t these folks get training?)
The next day I had a ride on one of the newest cars, and it was a real contrast.  There were electronic signs displaying the next station, electronic line maps, and very clear recorded announcements!


Information can be a wonderful thing. 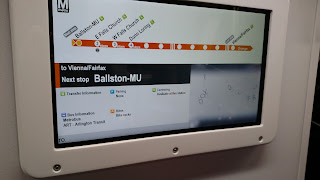 What do you want? Information! (highway edition)

We spend a ton of money on intelligent transportation systems and are rapidly expanding our ability to collect, analyze, and display traffic information.  How much of this high-tech stuff reaches the customer?  Not enough.
As one example, I recently saw a display of the cool things that folks at the University of Maryland are doing….. 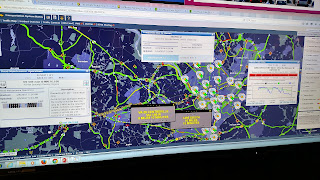 But visiting the Maryland House rest area I saw nothing but a dumb map…………. 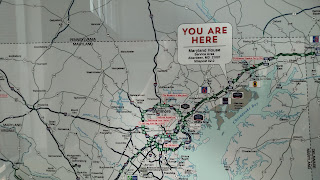 Update:  On a later visit to Maryland House, I did see a live camera view!  So at least some data is making it to the consumer!
Posted by Mark at 8:18 AM No comments: