Happy Thanksgiving! (and Pennsylvania transportation professionals have even more to be thankful for!)

Pennsylvania Governor Tom Corbett may have the worst poll numbers of any governor in America, but he put some smiles on the faces of transportation folks before Thanksgiving as he signed a major transportation funding bill that he had successfully steered through a very rocky course (details and background in my earlier post here). 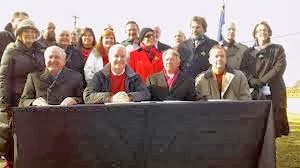 PlanSmart New Jersey, one of the state’s most influential nonprofits, has just celebrated its 45th birthday and shows no signs of slowing down.  Under the leadership of new ED Ann Brady (formerly with other positions in the organization) PlanSmart continues to be an energetic and persuasive advocate for smart planning in the Garden State.
The breadth of PlanSmart’s influence can be seen in their latest honorees (see their website here).  One of my favorites is the Lawrence-Hopewell Trail, which proves that building nonmotorized transportation infrastructure really can happen in suburbia!
On their website, also check out the excellent town planning guide, “Out and About: A Guide to Sustainable Local Circulation Planning,” by Carlos Rodrigues and colleagues.


Congratulations to PlanSmart New Jersey and best wishes for another successful 45 years!
Posted by Mark at 2:13 PM No comments:

In a dramatic turnaround, the Pennsylvania House of Representatives has approved a $2.4 Billion transportation funding package, only a day after voting it down (good summary story here).  The bill passed the Senate in June by a bipartisan 45 – 5 vote, but has been hung up in the House, where anti-tax Republicans seemed content to let Pennsylvania lead the nation in structurally deficient bridges rather than increase any taxes or fees (sound familiar?).
Governor Tom Corbett, who’s approval ratings are underwater, didn’t shrink from the fight and pressed hard for the measure, including bringing in former governors Ed Rendell, Tom Ridge, and Mark Schweiker to speak for it.  PennDOT Secretary Barry Schoch put together a “Decade of Investment” project list and posted weight limits on 1,000 bridges to dramatize the problem.
The politics got pretty crazy toward the end. The sweetener to get Republicans on board was an anti-labor provision that increases the exemption from state prevailing wage rules for projects from $25,000 to $100,000.  However, the sweetener for Republicans was also a poison pill for many Democrats. The cause appeared lost Monday night, when the House voted the bill down, but several Republicans were persuaded to switch by Tuesday, no doubt with interesting stories behind each switch.  In the end, the bill passed 104 – 95, with a small majority of Republicans voting aye and small majority of Democrats voting no.
Of course most transportation funding votes these days have complicated politics, the details of which vary from place to place and time to time.  The takeaway here, I think, is that bipartisan funding votes really are possible.
The Pennsylvania bill (which I should point out still has more hurdles to get across) raises several taxes and fees, with the largest revenue coming from removing the cap on a wholesale fuels tax, which will effectively, in a few years, increase the motor fuels tax by about 25 cents per gallon.
The plan includes a robust increase in funding for transit and multi-modal programs (air, rail, bike/ped) and some structural reforms, but doesn’t go as far as many of us would like (my earlier comments here).


I think we have to score this a big victory for transportation funding.
Posted by Mark at 7:10 AM No comments:

New Jersey now has its first “DC Fast Charging” station for electric vehicles, with the official opening of the new U-Go charger at the Wyndham Hotel in Mount Laurel.  The new facility is located on Route 73, just off Exit 4 of the New Jersey Turnpike and very close to Exit 36 of I-295.  Why is this important?  Unlike typical home and public EV chargers, Fast Chargers can “fill up” a depleted battery in 30 minutes.  That means that a strategically placed network of Fast Chargers can make long distance travel practical, even for today’s first-generation electric cars.  And that’s exactly what the U-Go Stations people – owner/operator of the site – plan to do.  They are looking for locations up and down the Northeast Corridor, from Washington, DC, to Boston (company website here).
In the frustratingly non-standardized world of electric vehicles, not all EVs will be able to charge here, at least for now.  The Mount Laurel charger is a “CHAdeMO”  design, meaning it will only work for the Nissan LEAF and other Japanese electrics (although Tesla has said they will offer a CHAdeMO adapter for sale for $1,000).
EV drivers will be able to find Mount Laurel via onboard information (on the LEAF) and via the USDOE website.  What would be helpful – and hopefully on the way – would be wayfinding signs on the Turnpike, I-295, and Route 73.
A real network of Fast Chargers would not only make longer distance travel practical for EV drivers, it would also reduce their “range anxiety,” by reassuring them that if they travel a little farther afield than intended and the battery runs low, they are not far from a place where they can get a quick recharge.
Congratulations to U-Go Stations for an important step forward!
Congratulations also to Nissan, which continues its commitment to electric transportation, Chuck Feinberg and New Jersey Clean Cities, the state’s chief EV boosters (see their website here), Wyndham Hotels, and Mayor Linda Bobo and Mount Laurel Township!


(Photos are of the ribbon-cutting and of Chuck Feinberg and yours truly.) 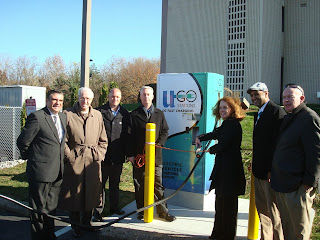 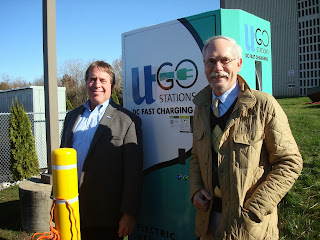 Poor Atlanta.  So many assets, so many problems.  So many opportunities, so many lost opportunities (previous thoughts here).  And now a new self-inflicted wound.
The Atlanta Braves are moving.  Are they moving to a new urban neighborhood, accessible by transit, poised to serve as the springboard for exciting urban mixed-use development?  Stimulating new restaurants, bars, and shops in a walkable setting?  Luring Millennials and Baby Boomers to revitalized housing?  Following the success stories of St. Louis (my comments here), San Diego, Baltimore, San Francisco, and others?
Not so much.  In fact, not at all.  The Braves are moving from the city of Atlanta to a suburban, sprawltown, 100 percent auto-oriented location at the junction of two Interstates.
Now I can see why the Braves were unhappy with their current location, Turner Field.  Although some news stories refer to it as a “downtown” location, that’s a bit of a stretch.  It’s an urban location, but not really downtown, and not really near anything.  Certainly nowhere near MARTA (is it a rule in Atlanta that major new activity centers must be located away from MARTA stations?).  The experience of leaving a ballgame at Turner Field is certainly no fun.  Instead of walking out to well-lit streets with cheerful crowds heading for bars and restaurants, you walk down empty streets and under dark freeway underpasses to find your car and get out of the neighborhood.  And now, bad planning is replaced by worse planning.
For those of us who spend our time immersed in sustainability and resiliency issues, Atlanta seems like a throwback.  Are there still people who believe that edge cities and bigger freeways and suburban sprawl are the wave of the future?  Apparently.


The good news is that many cities understand that well-planned urban ballparks create economic value and promote a better quality of life, not only for city dwellers but for the entire region.  This chart from Deadspin shows clearly how most cities have been moving ballparks in toward the region’s center, not outward.
Posted by Mark at 6:37 AM No comments:

Obviously our thoughts and prayers right now are with the people of the Philippines, who are dealing with the calamity of Typhoon Haiyan.  Although, as we know, climate change doesn’t cause individual weather events, it seems to be the scientific consensus (reinforced by everyday observation) that scary events are getting scarier and more common.
And speaking of scary, the latest predictions for the longer term just keep getting grimmer.  Do you find numbers or maps more compelling?  If you’re a numbers person, the latest report from the World Meteorological Organization will give you a chill.  The report is here, but the gist is in the first sentence of the press release: “The amount of greenhouse gases in the atmosphere reached a new record high in 2012, continuing an upward and accelerating trend which is driving climate change and will shape the future of our planet for hundreds and thousands of years.”
Want to see a chilling set of maps?  Try these from the National Geographic!


I continue to anticipate (and push for) a paradigm shift in national consciousness on this issue.  It’s got to be sooner, not later.
Posted by Mark at 2:52 PM No comments:


Best luck for another successful 20 years!
Posted by Mark at 10:02 AM No comments: