Just 5 years ago an incredibly destructive tornado roared through my old hometown of Joplin, Missouri, killing 161 people and leaving a wide band of devastation that is still being restored.  The town’s high school (my alma mater), largest hospital, and many businesses and homes were destroyed.
A link here to one of the moving ceremonies commemorating the event….


As we work to improve infrastructure resilience to climate change and extreme weather events, it’s good to remember why this is important. 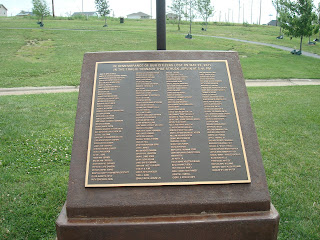 A New Jersey business group has refloated the idea of extending the River Line transit system from the city’s train station, where it now terminates, to the downtown area, a distance of a bit more than a mile (news story here). Mid-Jersey Chamber of Commerce director Bob Prunetti announced the plan in a press conference with Trenton Mayor Eric Jackson.  The existing line is mostly on dedicated right-of-way, but the extension would run on city streets.  Some initial planning was done on this segment when the line was started, but it was dropped for cost considerations.  It is currently on an NJ Transit shelf list (“projects to be defined/studied”).
The extension is a great idea and should be done to fully connect the state capital to the state’s transit network.  In fact, the extension really needs to continue – in a future phase – through Trenton to connect with another rail line and with the Trenton airport.  (This was recommended by an airport land use study I led a few years ago.)  There is, not surprisingly, no money for this project, or for several transit projects queued up ahead of it.  However, we continue to hope that the New Jersey Transportation Trust Fund will some day be replenished and will begin to fund the work that needs to be done to bring the state’s transportation system into the 21st century.
For those of you not familiar with it, the River Line is a 34-mile long, 21-station diesel transit line connecting Trenton and Camden and carrying 9,000 passengers a day.  It runs through several old towns along the Delaware River and was envisioned as an economic development project as much as a transportation project.  (The story of its birth involves a political promise to invest state Transportation Trust Fund money in transit in South Jersey, a rebellion against another proposed line by wealthier suburban towns, and the availability of a rail right-of-way that Conrail was dumping.)   Although usually categorized as a light rail line, it really has more in common with the type of service that a hundred years ago was called an “interurban” line.
The Mid-Jersey Chamber of Commerce decided to launch the project as a means of stimulating economic development in downtown Trenton.  The city’s redevelopment has lagged behind that of similar urban areas in the Northeast.
The group has backed up its proposal with a white paper, “Light Rail Economic Impact Study for the City of Trenton” (link in the news story cited above), which lays out the economic development case for the project.  The study also refers to the further extension, toward the airport and the Ewing Township redevelopment project, which I mentioned earlier.  The full River Line extension – together with existing and proposed Amtrak, NJ Transit, and SEPTA rail lines, a new BRT service, and a relocated airport terminal – would create a modern, transit-linked, urban center, anchored by the state capital and the Princeton knowledge hub.
Now we just need to start putting the pieces into place. 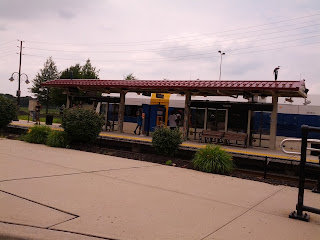 Long-range planning for climate change is a work in progress in the transportation community.  Everyone (well, maybe that’s a slight exaggeration) knows it needs to be done but the theory and practice are still in a very formative state.  A current “best practice” that planners should look at is the Future Forces report published by the Delaware Valley Regional Planning Commission as part of their long-range planning effort.  The Future Forces report (short version here, long version here) identifies five forces that seem likely to shape the future.  (I have had the opportunity to be part of this effort.  Some general comments here.)  One of these forces is Severe Climate.
The “What-If” Scenario for Severe Climate in the greater Philadelphia region takes us to what things might look like in 2045.  There are lots of problems worldwide: flooding, extreme weather events, droughts, food shortages, infrastructure failure.  However, things are not actually so bad in Philly:  “Relative to other areas, Greater Philadelphia has become a more desirable place to live due to less risk of sea level rise and continued water availability.”  In fact, a population increase is predicted due to “climate change-driven immigration.”  I think this is a critical point.  The DVRPC planners recognize that the ill effects of climate change are not going to be evenly distributed.  There will be lots of regional variation.  How we plan as a nation should be complemented by how we plan as regions.
This doesn’t mean that Philadelphia gets a free pass.  Problems in 2045 will likely include flooding threats to Philadelphia International Airport, port facilities, the Northeast Corridor rail line, and highways.  Higher river levels may reduce effective bridge clearances and restrict ship traffic.  Infrastructure maintenance and repair costs will increase.  And current projections suggest that things really start to turn ugly after 2045.
The report identifies “top regional actions” that are recommended to prepare for the effects of each of the Future Forces.  For Severe Climate adaptation (mitigation is also included in this section), the recommended actions include:
·      Identify vulnerable community and transportation assets and take steps to minimize risk,
·      Improve emergency preparedness,
·      Make improvements to wetlands and build levees as needed to prepare for flooding, and
·      Update building codes.
In addition to scenario-specific actions, the plan identifies “universal actions” – actions that are “beneficial to the region regardless of which forces come into play in the future.”  This is the approach that is sometimes called “no regrets” planning.  Among these universal actions is improving resiliency:
“Create and implement regional infrastructure resiliency plans.  Increase funding for projects that reduce vulnerability, and enhance flexibility and resiliency of infrastructure to the effects of climate change.  Accommodate relocation of critical assets where possible and harden them where it is not.”


DVRPC deserves congratulations for tackling long-range climate change planning aggressively and skillfully.  We all have a lot to learn in this department, and the Future Forces effort helps our education.

Greater Philadelphia Future Forces: The future ain’t what it used to be

The Delaware Valley Regional Planning Commission has published a short version of its Future Forces report (available here), an innovative effort to inform long-range planning through envisioning the big trends that will shape our world in 2045.  I have had the privilege of being part of this effort, which brought together a core group of smart and knowledgeable people, along with DVRPC staff, to wrestle a lot of data, predictions, and ideas into what is (hopefully) a useful guide to forward-looking decision making in transportation, infrastructure, housing, and other fields.
The process identified five key “future forces” that will likely drive events over the next 30 years:
·      Enduring urbanism – the return of cities and continued growth in urbanized places
·      The free agent economy – the transformation of the employment experience from careers to jobs to gigs
·      Severe climate – climate change and extreme weather events
·      Transportation on demand – Uber and beyond
·      The U. S. energy boom – natural gas and renewables are making the energy future look a lot different
For each of the forces, the DVRPC report set out what-if scenarios, metrics, challenges, and desirable actions, tailored to the needs of the greater Philadelphia region (5 counties in Pennsylvania and 4 counties in New Jersey).


This is really a cutting edge effort, and anyone interested in long-range planning should take a look at this report.  Better yet, you can also go to the full technical report, available here.

The idea of introducing a tax on carbon in the United States has returned to the policy spotlight.  Two papers by David Roberts on Vox.com have advanced the discussion considerably.  The first paper (here) argues that a carbon tax is not a policy panacea for curbing climate change, which will, in the author’s view, require a whole bunch of very aggressive, activist policies.  But it is still worth doing.  The second paper (here) directly addresses the political constraints on enacting a carbon tax.
Now, we all know that there are rigid political constraints on doing anything at the federal level these days, perhaps beyond naming post offices for deceased former congressmen.  Roberts doesn’t flinch from facing these constraints, laying out a crisp critique of various proposals and putting forth his own.  The crux of the issue, he says, is not to focus on the tax itself but on what to do with the revenue raised by a tax.
He correctly – in my view – points out the defects in the “revenue neutral” approach favored by many analysts.  I would add one more argument against a revenue neutral approach: the federal government needs more revenue.  The fact is that today the federal government doesn’t have enough revenue to comfortably operate its existing programs, much less undertake the work needed to attack this country’s serious social and economic problems and to do the public sector work that needs to be done to make us a successful 21st century nation.
Roberts argues, on political as well as policy grounds, that a more successful approach would be to earmark revenue from a carbon tax for popular and effective clean energy programs.  The program would sell the tax.  His suggested narrative:
“First: We want to accelerate the technological development, early market commercialization, and wide deployment of clean, renewable energy, so that America can innovate, create jobs in some of the 21st century’s most promising industries, and spur economic development.  We’ll also set aside some money to make sure no one is left behind or left out of the new energy economy.  Then: Oh, and guess what: It’s paid for, entirely funded by a tax on fossil fuel energy.”
One side note on the politics of a carbon tax: Roberts mentions the experience of British Columbia, which has the best-known carbon tax in North America, one that has survived the push and pull of party politics (my earlier comments on the BC tax here).  In fact, many in BC, including local politicians, are arguing for increasing the carbon tax (news story here).
Now, some thoughts on what all this has to do with the transportation sector.
Roberts suggests, in the first paper, that a carbon tax will have little effect on transportation: “It’s a blunt-force tool.  It will do wonders in some sectors (driving coal out of electricity) but very little in others (driving oil out of transportation).”  I would note, however, that driving coal out of electricity would add great value to the increased proliferation of electric vehicles.  The overall benefits of EVs depend a lot on how the electric power they use is generated.
A more important point goes to the use of carbon tax revenues.  Why not use some of these revenues to advance the electrification of the transportation network?  Some possibilities:
·      Subsidize EV sales – a proven strategy
·      “Electrify” the Interstate highway system – install “fast chargers” at regular intervals on the network, enabling long-distance EV travel and allaying consumer “range anxiety”


·      Subsidize the rapid transit New Starts program – We will need a lot better transit as part of an overall climate change policy, and today’s program for system expansion is woefully underfunded.
Posted by Mark at 7:51 AM No comments: