I had a chance recently to ride the new (three-year old) Kansas City Streetcar – and I was impressed!
The streetcar runs on a 2.2-mile starter line along Main Street in downtown Kansas City.  Financed by a transportation development district, it is fare-free and connects such major activity centers as the financial district, River Market, the Power and Light District and other entertainment areas, the Kauffman Center for the Performing Arts, and Union Station.  A major extension south to the Country Club Plaza district and the University of Missouri at Kansas City (as well as a shorter extension to the north) is in the works.  (See the Streetcar website here.)
I found the cars very comfortable and the ride very smooth.  There appeared to be a wide variety of patrons using the streetcar as a hop-on, hop-off service.  Happy to see an old favorite town of mine using the streetcar mode so well!  I hope the extensions happen as planned! 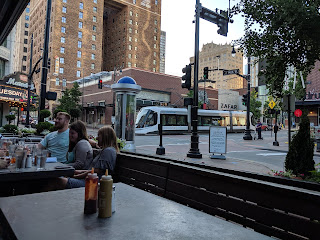